Being an ethicist can really suck the fun out of things sometimes. For anyone else, the opportunity to live and work in a remote Indonesian city for a year would be a wondrous experience of cultural richness, indigenous wisdom and the chance to see the world from very different, yet equally valid perspectives. Sure there’ll be differences of opinion, even things that might make us sheltered Westerners cringe a bit, but these moments just illustrate the importance of walking a mile in another person’s shoes before you leap to judge.

But not this guy. Oh no, this guy had to go poking around looking for objective truths and then found he couldn’t go back. This guy became an ethicist and as such, is looking at this happy narrative with one eyebrow raised so high it’s disappearing into his hairline – he tried walking in the other guys shoes and the bloody things fell apart.

One of the defining ideological struggles of the last century has been between those who seek to embrace other cultures and those who reject them. The explosion of globalisation, communication and migration over the last 50 years has resulted in unprecedented interaction between cultures once isolated by geography and xenophobia – the spread of Buddhism to the west, the unstoppable spread of USA pop-culture, and the vast migration of itinerant workers to and from Saudi Arabia are but a few examples which stand in stark contrast to concepts such as the White Australia Policy, deemed so acceptable well into the 20th century.

The result has been a collision of cultures on an unprecedented (if less aggressive) scale even than colonialism, leading to widespread ideological conflict as differing and often contradictory ideas meet in the same space. While many have welcomed this as an opportunity to learn, others angrily oppose these challenges to their way of life and reject new cultures wholesale. Cultural tolerance has been the official, politically endorsed middle ground between these two schools of thought – you don’t have to like it, and you can even oppose it, but everyone has the right to live their lives as they wish, provided they don’t push their luck.

So what about this very reasonable compromise so irked me during my time in Indonesia? Well it turns out that many of the ideas protected under the banner of cultural tolerance are, in practice, completely stupid.

Indonesia has a culture focussed heavily on relationships; the first priority in any dealings must be the relationship between the parties involved. You must never embarrass others, nor challenge them outright – overt conflict is extremely unusual. While this results in incredibly strong communities that look after each other in ways Australians can only dream about, some of the side effects are less than ideal. Corruption is endemic throughout Indonesia thanks largely to this focus on relationships; from employment through to elections, there is no question that relationships take precedence over any form of merit.

This in turn leads to utter incompetence in the public service. If merit wasn’t relevant in getting the job, why would performance be relevant to keeping it? There is no incentive nor demand for the government to maintain basic essential services such as sanitary hospitals (10% of mothers die in childbirth), reliable water supply (every four days if you’re lucky and always undrinkable) or proper waste management (most waste is burned or dumped in the river). Most communities even resort to raising money to fix their own roads privately, thanks to overwhelming government indifference. Yet despite these shortcomings the local Governor can still somehow find 1 billion Rupiah ($100,000 AUS) for a fireworks display to celebrate his re-election, as well as funding for the MTQ Tower (pictured), commissioned at ridiculous expense for a tourist market that never existed, only to be be left incomplete (and structurally unstable) by the next Governor because it was the last Governor’s legacy. 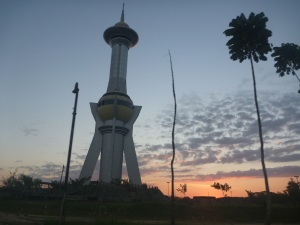 Another less noticeable consequence of this culture is the invisible people; those that stand outside what the community deems acceptable and as such lose any claim to its embrace. Homosexuals, sex workers and feminist-minded women might be tolerated while times are good, but best learn to lay low when things go wrong – the community offers none of its protection for deviants. Sex workers in particular, despite massive demand from local men, have no rights whatsoever due to their incompatibility with both Islamic and Christian doctrine; doctrine that the men get around by the outright statement that ‘a whore is not a real woman’. Unsurprisingly, the police are no more interested in the plight of such sub-humans than the community is, leaving such women trapped without legal or community protection in a nation where such things are the only things that matter.

Such are the realities we are told to accept, indeed respect in the name of cultural tolerance.

Were such injustices the norm in Australia my outrage would be incandescent. The idea that I would be restrained in my criticism of such standards, out of respect for the underlying culture that itself enabled them, is more ridiculous than I can express – indeed, I have been nothing less than brutal in my criticism of how Australian culture has allowed our current abuse of asylum seekers for purely political ends. Why should other cultures be immune from such a basic analysis?

The reality is that a culture is simply a collection of ideas and practices that have been around for a long time. To say culture should be respected or even defended simply because it is culture is nothing more than an argument from tradition; just because something has been around for a long time doesn’t mean it makes a lick of sense, nor does it mean it should not be changed forthwith. And in the case of both Indonesian corruption and Australian xenophobia, it is the clear-cut duty of every human being to change them.

So how is this any different from the ‘reject all foreign influences’ school of thought? The distinction is threefold;

Introspection – The ethical imperative to criticise and reform culture does not just apply to other cultures. In fact addressing the failings of our own culture is virtually a precondition to criticising the shortcomings of another.

Accuracy – It is extremely easy to criticise that which we do not understand, and without a lifetime embedded in a culture, how can one truly claim to understand it completely? Indeed I fall prey to this mistake in this very article – one year in one specific location does not even come close to qualifying me to speak authoritatively on Indonesian culture. That said however, specific, factual observations can be made, and with appropriate and objective research into the reasons for these observations, conclusions can safely be draw about the aspects of any given culture, as with any topic.

Method – Simply identifying a fault within a culture does not give an open license to kick in the metaphorical front door and start demanding changes. Tradition may not justify poor practices but it does make them extremely difficult to change, with brash criticism extremely unlikely to help the situation; having criticised the overtones of Anzac Day earlier this year this has been made extremely clear to me.

As with most ethical debates, friendly dialogue, openness and tolerance are among the most persuasive methods available to change ideals and behaviour. Cultural tolerance provides us the safe space to engage in positive conversations necessary for change; safe spaces that angry, blunt criticism shut down. In practice then the message becomes clear; culture, as with any set of ideas must be open to criticism, but the way we conduct that criticism is best done through open, positive and tolerant dialogue.

7 thoughts on “The Ethics Of… Cultural Tolerance”