Every year on the 25th of April, Australians and New Zealanders gather to remember those who have paid the ultimate price in the defence of our countries and other countries across the world. It is a reflective affair that combines the solemnness of loss with the warmth of pride in those that sacrificed that we may live better lives.

For years I attended the Dawn Service held in Melbourne, rising in the dark and traveling with thousands of others in the cold and often wet to stand at the Shrine of Remembrance. These were some of the most profound moments of my life – being part of a huge crowd of strangers, yet united in a single cause; reflecting on something greater than me, my life or even the sum of all the people there with me.

But there was always something that quietly bothered me on those days. Some specter of disquiet that sat on my shoulders and wouldn’t piss off no matter how much self-loathing I threw at it. For years I pushed it down, smothered it and stood as straight as the next patriot. It wasn’t until 2004, with my country up to its armpits in the Iraq War, that one line at the Dawn Service finally brought home what had gnawed at me for so long:

“Today we celebrate the glorious dead.”

‘Glorious’. Funny that one word can destroy such a closely held ideal so completely. As I stood there, my country was complicit in a war against a country that posed no threat to us or our allies. We were helping bomb a thousand human beings into dust. We were helping to occupy and sell a nation for nothing more than economic profit. All of this on pretenses so flimsy that people just had to stopped caring. And those soldiers we sent were dying. And this, apparently, was ‘glorious’.

I was left reeling; it was only now that I realised that for my entire life to this point, thanks to a fascination with the Second World War, I had thought of fighting for my country as the greatest honour any citizen could hope to aspire to. I did think of it as glorious. I did think that to die facing an evil foe in defence of my country was a good thing to aspire to. But how could I reconcile that with the blatant wrongness of what we were now doing in Iraq? Sure, the World Wars might be clear-cut examples of Australians fighting for justice, but didn’t it make it all the worse now that we were using the example of those righteous soldiers to describe Iraq as ‘glorious’?

That we would ever pervert the memory of those soldiers to promote an unjust war was disturbing enough, but that was just the tip of a very dark iceberg. I had studied the World Wars in more detail than most, but it was only now that I turned a critical eye to the most sacred icon of ANZAC Day: Gallipoli.

The Gallipoli Campaign was a minor footnote in the battles of the First World War; an aborted attempt by the Allies to invade the Ottoman Empire (now Turkey) and open a new front, hopefully breaking the stalemate in France. While the invasion was a dismal failure, it signifies the first time Australian and New Zealand troops fought under the banner of their own countries, rather than as British subjects, and was marked by extreme bravery and tenacity under terrible conditions. Australians take pride in the Gallipoli Campaign, not as a military feat, but as a demonstration of all that is best in the Australian people; bravery, tenacity, courage under fire and mateship.

What few of us know (or are willing to accept) and what I was now forced to confront, is that the Gallipoli Campaign was, and continues to be, the single most horrific betrayal of the Australian people since colonisation.

Ask yourself the question: what was the First World War about? Too many people when posed this question confuse it with the Second, where we fought two clearly evil aggressors that committed unspeakable crimes against civilians and prisoners of war. But the First World War had no such clear-cut causes to rally behind; no minorities were persecuted, no mad ideologies were imposed, the fate of the world never hung in the balance. The First World War was about one thing and one thing only; empire.

The British Empire, the Ottoman Empire, the German Empire, the Austria-Hungary Empire, France and all its colonies, what did these grand monoliths have to lose from the assassination of a noble in a tiny Balkan Country? Sure there was an intricate series of alliances that might compel them to become involved, but what would the consequences have been if they had just ignored the situation? Not a god damn thing. Let the Balkan states duke it out and pick up the pieces when they’re done, or send in peace-keepers if it means that much to you.

But what did the great Empires of the early 20th century have to gain from this convenient excuse to go to war with each other? Land – the foundation of the state and the source of all its wealth. And all it would cost them was the lives of some soldiers. And what are lives of mere soldiers to Empires founded and maintained on the slaughter and repression of millions? So to war they went, just as they had for generations before.

As a member of the British Commonwealth, Australia was always going to be called to serve the motherland and so 416,809 Australian men enlisted to fight, of which over 60,000 were killed and 156,000 wounded, gassed, or taken prisoner. These men, along with every other soldier and civilian caught up in the war – nearly 39 million in total – died for absolutely nothing. Worse than nothing; a land grab by decaying Empires who once again saw war as an extension of politics, and were willing to pay lives to achieve their ends. The glorious British Empire so many Australians fought and died for was no different than the Central Powers they opposed, just a different side in a war so unjust it reeked.

It was one thing for these European powers to play at war for spoils – indeed they had been playing at it for thousands of years to this point – but Australia did not have that excuse. We fought because we were told to. The Gallipoli Campaign was the un-provoked invasion of a sovereign country that never posed a threat to us in any way. It was, by any definition, an unjust war that we deserved entirely to lose.

But we cannot not blame the soldiers that fought in those bloody battles, however unjust the cause. How, in the beginning of the 20th century, could we expect them to know the truth of the war that volunteered to fight? The motherland was calling and they answered. Indeed those soldiers were the victims of a monstrous betrayal by their government; a government that lied to them when it told them their homes and families were threatened, and that they would fight on the side of justice.

But to call them ‘glorious’ or ‘heroes’ for fighting that war is bluntly untrue. Worse, it’s a despicable lie that betrays those soldiers all over again. Of course many Australian troops were heroic in battle; saving the wounded, sacrificing themselves for their friends, putting themselves into grave danger to achieve their mission, but the same is true of any fighting force in battle – there were plenty of noble acts by Nazi soldiers on record for those willing to believe it. But to hail these men as heroes for joining up and fighting at Gallipoli, the Western Front or anywhere in the First World War on the false pretense of justice does not celebrate them or the genuine sacrifices they made, it celebrates the lie that they were betrayed by.

I asked last week in The Ethics of War whether there was any greater crime a person could commit than to involve their country in an unjust war. Well there is one: 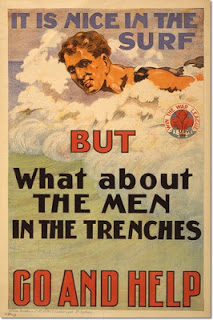 To use the deaths, the fruitless sacrifices of those men and women you betrayed and caused to die through your lies, to recruit more men and women to fight and die in your unjust war? That is the greatest sin I can imagine.

So go to the ANZAC Day celebrations tomorrow. I will see you there. But if you wish to truly honour those that made the ultimate sacrifice for their country, remember the ones who were betrayed and died for nothing.

And never let it happen again.

5 thoughts on “Month of Blood: The Ethics Of… ANZAC Day”