Ethics is the study of grey spaces – the pursuit of what is right and wrong into the murkiest depths of the human psyche, asking the painful question we all try to hide from. Ethics is, in practice, the understanding that life is complex and clear cut answers rarely exist.

So there’s nothing I enjoy more than a topic that, after close and serious examination, has no redeeming features whatsoever and I can just unload on. Fashion, dear readers, is just such a concept.

Quite a few of you will be protesting already and there’s a fair chance I’ve lost some people on the title alone. What’s so bad about dressing nice? We’re not talking about fur here, or sweatshop labour, but fashion itself and fashion is just dressing in ways you enjoy. Right?

Let’s take a little look at that idea:

Inquiring comments are met with nonchalant smugness. Ridicule is met with haughty condescension. They inform you that this is the latest fashion. Eventually you give up on it and let it go – a little shaken by their confidence.

Suddenly you start to notice other people doing it. The media makes jokes about it and old people grumble about the indecency of it all, but if anything that just makes it more popular. Whole ranges of underwear are being sold specifically designed to be worn on the outside. All your friends are doing it and now they’re making jokes about you for not doing it.

And eventually you cave. You buy a pair of jocks for $120 and put them on over your pants. It feels stupid and the chaffing is unbelievable, but you do it. Because it’s fashionable.

Now I know what you’re thinking; what a ridiculous example! No one’s ever going to think wearing your underwear outside is cool! It’d look stupid! Not to mention uncomfortable. Really if we’re going to discuss this topic we should stick to realistic examples!

To which I reply: Glasses without any actual glass in them. Pre-torn jeans. Bikes without gears. Platform shoes so unstable they endanger your safety. Hair styles that obscure your vision. And, of course, cosmetic products designed to achieve a ‘natural look’ (that is to say, like you’re not wearing makeup).

These things are all currently fashionable (or were recently, I’m not really keeping track). And compared to simply wearing your underwear on the outside, they are actually, somehow more stupid.

But so what, right? Sure fashion often doesn’t make sense, but it doesn’t have to make sense! Not everything has to be practical! So where’s the harm in it?

It’s in the god damn smugness, that’s where it is. The careless attitude that, because someone paid an idiotic sum of money (at a 500% mark-up) for a garment of particular specifications, because it’s what everyone else with too much disposable income is also buying, that they are somehow better than other people. Surprisingly, this attitude makes me tetchy.

But it actually gets worse than that – the sheer number of otherwise rational and sensible people who have sincerely tried to advise me on how to dress ‘properly’ beggars belief. “You have to dress respectfully!”, or “People will think less of you”, or “You could look so much better”, and of course the ever-popular “You look like crap”, flung at me as if these are simply home truths that I should already know and accept.

Allow me to make the point I have been skirting this entire time: as with all art, FASHION IS SUBJECTIVE. What we think is fashionable at any given time has no basis in fact whatsoever, but depends entirely – ENTIRELY – on what we, as individuals and groups, believe is fashionable.

Why are suits ‘respectful’ dress at a funeral, wedding or other formal occasion? Because we believe they are AND FOR NO OTHER REASON. There is nothing in the function or design of a suit that makes it respectful in some tangible way. No one, with their eyes blindfolded, feels more ‘respected’ if someone in a suit is nearby – all that matters is that we think it is.

Similarly, why are speedos totally acceptable at the beach but mortifying if worn anywhere other than a beach or pool? Literally nothing changes about the garment, but we as a culture deem the wearing of speedos, in anything other than the ‘correct’ location, so heinously unfashionable that you’re likely to be publically chastised for doing so.

Now if all we were talking about was social convention that would be one thing – right or wrong, social conventions tie us together and give us guidelines. I can see the value. Fashion on the other hand changes. What was deemed fashionable one month is discarded the next. What would have gotten you laughed at or even banned from entering a bar a year ago suddenly becomes the vastly expensive, must-have item now. And people judge each other based on this.

It might all make a bit more sense if fashion were improving each time it evolved; reaching towards some great vision of perfect fashion that we slowly progress to over time. But it doesn’t. It just goes in god damn cycles. Remember those terrible old 70’s fluro clothes we laugh at these day? “How could anyone ever possibly think that looked good?” we laughed. Well they’re coming back. Fucking fluro leggings, shoes, tracksuits all over the god damn place around my town. And if you dare to laugh at them like we were allowed to do only a few months ago, you’ll find yourself on the receiving end of more scorn than a Scientologist.

So to summarise, here we have people who pay massively inflated prices for clothes, based entirely on other people doing the same thing, despite a full knowledge that those cloths will become unfashionable again in 6-8 weeks. And these people think that this sort of behaviour makes them better than me. And that I should be thankful to them for pointing out these obvious shortcomings.

And yet despite this despicable and utterly irrational state of affairs, people still have the balls to look me in the eye and tell me that “Fashion is important”, because “Fashion is about self-expression”. Some twat recently wrote a book about it, which pretty much lit the fuse for this entire ranty article (sorry about the image quality; my hand was literally shaking in rage at the time): 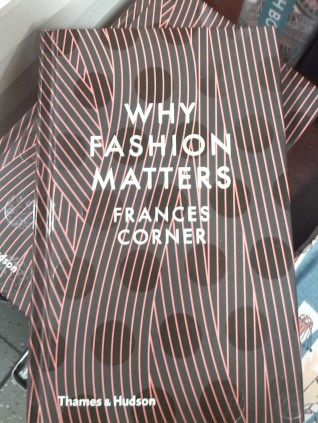 And sure I can buy the idea that what you wear can be a powerful way of expressing yourself. I do it myself quite frequently and find it a useful way of learning about others as well. But what I don’t buy is that fashion has anything to do with that. Why not? Because since when does self -expression involve COPYING A GOD DAMN TREND? It’s SELF expression for crying out loud, SELF. What are you expressing about yourself by blindly following the latest trends, and dropping hundreds of dollars on items you don’t need, and soon won’t want either? Because the only message I’m getting is that “I’m conforming as hard as I can in a desperate effort to deal with my own insecurity”. A firm factual basis upon which to heap scorn on others? I think not.

And this is before we even get started on shit like waxing, high heels and motherfucking cosmetic surgery. Hey ladies! You know that hair that grows naturally under your arms? We’ve decided that it’s gross and you need to painfully remove it. Don’t question these instructions! Never you dare ask why it’s ‘gross’ on women but not men, or why something natural and in no way related to hygiene gets such a strong reaction from complete strangers. No, you conform like a good little girl or we’ll shame you so hard it may very well give you psychological issues. Whop on those high heels that will screw every part of your body apart from your pelvic floor (and won’t we make a song and dance about THAT), cut your body up into shapes we find aesthetically or sexually pleasing, and dance for our entertainment bitch.

This hasn’t been very ethics-related so far so let me lay down the skinny for you: I’ve thought long and hard on the topic and found two, and only two situations in which another person’s opinion on your appearance is in any way relevant:

1. Sexual appeal. Like it or not, appearances matter here. That said, thanks to wondrous age of the internet and online dating, you can now find people who are in to just about any body type/shape/arrangement.

2. When you need to manipulate someone who doesn’t think enough. Of course I’m going to wear a suit to my next job interview. But is that because that suit is actually important for the task? Or is it because my interviewer almost certainly thinks it is and I want the bastard to employ me. Like it or not the world is full of people who take fashion seriously and will judge your worth based on your appearance. And like it or not, you will need things off these people and they will be harder to get if you don’t pander to their idiotic, baseless preconceptions. It’s one of the best examples of balancing the Principle with the Practical out there.

But you dare, you bloody dare to imply that what you’re wearing is any more important than the cotton it’s made out of, holy mother of mercy I will gut you. I’ll gut you and wear your corpse as a warning to others.

Well I would, except that they’d probably just ask me who I was wearing.

12 thoughts on “The Ethics Of… Fashion”