It’s one thing to swear, but for sheer instinctual outrage there is nothing like a racial epitaph. And the king of all racial epitaphs, the one that everyone knows and fears, and nobody outside that ethnic group is ever, ever, EVER allowed to say is ‘nigger’. Especially when you’ve already established that you’re white. Really, really white.

Forget ‘cunt’; drop the N-bomb in your local supermarket and you’re looking at being howled down and tossed from the store at the very least. Capture the incident on film and you can say goodbye to your job, and say hello to a brief spell of national notoriety – as quite a few people in Australia have recently discovered. And drop it in the wrong company and you might also get to look forward to a beating as well.

For anyone with even the slightest understanding of history, the reasons for this powerful reaction are obvious; invasion, colonisation, genocide, slavery and systematic racial discrimination aren’t things a people tend to forget in a hurry. And nothing quite summarises the attitude that made these atrocities possible like the word ‘nigger’.

It is, in one word, the aggressive reminder that people like you used to be property – sub-humans, only good for manual labour, entertainment and convenient scapegoats for social problems. And that even when you finally overthrew that oppression the same culture of servitude persisted, marking you out as second-class humans that must be kept separate from white people, in case your type pollute our Aryan genes.

Pretty powerful stuff, right? And extremely hard for your average whitey like me to get our heads around, because there is no equivalent of ‘nigger’ for a white person. Broadly speaking, we’ve never faced that sort of persecution for any word to refer to.

“…shouldn’t have called me a cracker. Bringing me back to owning land and people, what a drag.” As always, Louis CK says it best.

This isn’t to say that white people haven’t been discriminated against or attacked simply because they’re white – that’s happened plenty of times, and continues to in many places. No one race has a monopoly on racism, that’s for sure. But these acts tend to be very contained or brief; the Zimbabwe government slaughtering white farmers is indeed a racist attack against white people, but it doesn’t really compare to the wholesale invasion and occupation of the country in the first place, does it?

So ‘nigger’ is a term loaded with a whole lot of nasty history. No shit, Sherlock. But the question should still be asked; why is the word itself taboo?

Last week I pointed out that offense is subjective – what an individual finds offensive is entire up to that individual. Some people find swearing offensive (many of whom have told me so extensively after last week), some people find homosexuality offensive, some people even find certain footwear offensive – and all of these statements are totally true. They do find these things offensive. The real question is whether anyone else should give a damn. 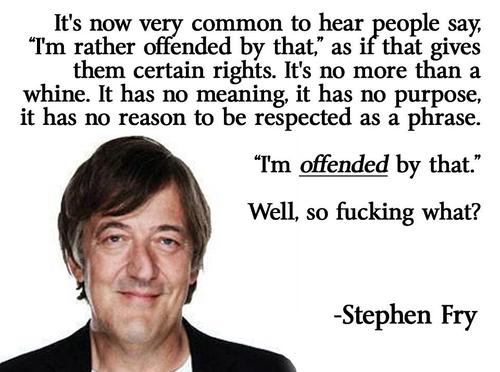 Just because a person finds something offensive does not mean that there is a problem with that thing. Offensiveness is just as much a matter of taste as what food you like, what music you enjoy, and what clothes you like to wear – the only relevant opinion is your own. How could anyone ever try and tell you “Oh, you like XYZ band? No! You’re WRONG! You don’t like that thing AT ALL!”.

And so, as we discussed last week, the word ‘cunt’ is only offensive because we think it is. The only thing any person ever needs to do to make it a non-offensive word, is to stop thinking of it as an offensive word. Nice and simple.

Based on this reasoning, the massive, MASSIVE taboo around non-black people saying ‘nigger’ seems questionable. It is, after all, just a word. Sure it might have historical connotations, but it doesn’t have to – depending on how the word is used it could mean anything we want.

This is best demonstrated by the black community’s efforts to reclaim the word for themselves. In many circles ‘nigger’ (and its variants) are now standard terms of address between black people, versatile enough to be complimentary, insulting, friendly, aggressive – anything the user wants it to mean. Ironically, this effort to own the word is also the best demonstration that the meaning for a word can change – which in turn reinforces the point that the offensiveness of that word is totally up to the person hearing it.

It is still an exclusive word for that community and fiercely guarded as such; though even this barrier is starting to break down thanks to people like Dave Chappelle, who’s satire of the word in his stand-up skits suddenly gave suburban white kids a pseudo-legitimate reason to yell ‘nigger’ at each other in public.

So with the historical nastiness that hovers around the word way back in the past, and clear demonstration that the word itself can be used in a variety of ways that don’t refer to that nastiness, why then is ‘nigger’ so taboo? Wouldn’t it actually be better if we removed this barrier between the communities, stopped telling each other what we can and cannot say, and treated each other as people?

Would that the world was so perfect.

Because there’s your problem: this is not in the past yet. The nastiness that made ‘nigger’ such a toxic word is still happening.

Even today, with legal equality and civil rights secured thanks to the endless struggle of generations before, active and passive racial discrimination is still a powerful force. From racial profiling (which lumps an entire race in with one specific criminal as if that were relevant), to career paths one can reasonably aspire to, to an overwhelming imprisonment rate, the struggle for social justice for black people, and any ‘minority’ group for that matter, are a long way from over (this is especially true in Australia, where Aboriginal people suffer a far worse quality of life than the general population).

And in this context, the word ‘nigger’ is not merely a reference to historical persecution, but an ongoing reminder to black people, that no matter what the law might have to say about it, you are not like the white man, and can never, SHOULD never hope to be.

‘Nigger’ isn’t just a reminder that you used to be a slave; it’s the assertion that that’s where you still belong.

Is the offensiveness of the word still subjective? Of course! Just like any word it can be used to mean whatever we want it to; and in the case of young white teenagers quoting Dave Chappelle skits, it almost certainly isn’t meant with racist intent. But for a black person functioning within a world that continues to at least attempt to treat them as second class citizens, it’s not terribly surprising that they assume the worst when they hear it.

And here we have our exception to the rule that offense is subjective; sometimes offended people have a point. Sometimes the thing that they find offensive is actually a factual problem that we should take seriously. ‘Nigger’, or what the word refers to, is one of those things.

This isn’t like ‘cunt’ which, once you actually think about it, is just a name for female genitals that we’ve decided needs taboo status for some reason (probably so we have something to insult each other with). ‘Nigger’ actually refers to something that is objectively bad, seriously harms people around us, and is happening right now. And while we can use it in ways that don’t refer to this harm, we can’t stop other people hearing it that way. ‘Nigger’ will always be associated with racism and oppression until that racism and oppression no longer exist.

I look forward to the day when ‘nigger’ is no more offensive than ‘cracker’, and not simply because it will remove that ever-present anxiety (or resentment, as per the idiot in the shirt up there) that I might say the wrong thing to the wrong person. I look forward to that day, because it will also be the day that racial discrimination finally dies a long overdue death in our society.

Contrary to what many might argue, every freedom comes with a price (we’ll get to that). Want the freedom to use this word without the racist stigma that comes with it? Well I’ve got good news for you, the price is to stamp out racism completely and utterly from our culture – something we all should be doing anyway.

5 thoughts on “Offensive July: The Ethics Of… ‘Nigger’”