After getting the year off with a bang with possibly the most morbid topic imaginable, it’s time to take things down a notch and have some fun. And what better way of doing that than by spending the next 4 weeks unloading both barrels into your childhood (assuming you were born sometime between 1980-1995). And if there was ever a beloved movie that deserved a sound thrashing over the wheel of retrospect, it’s The Lion King.

Now it’s hardly new to point out that older Disney films were pretty messed up if you paid even the slightest attention. But unlike the racist crows in Dumbo, the sexism in The Little Mermaid, or the incredibly messed up priorities in Aladdin, The Lion King has somehow managed to avoid the same sort of critique.

But what is there to criticise? It’s a classic coming of age tale about loss, responsibility, love and justice, featuring memorable characters and some of the best songs of any Disney film ever. The entire thing is an adaptation of a Shakespearean play for crying out loud, what more could we want from a kids film? Thematic symbolism?

But that’s the sneaky trick with this film; it’s so good at telling you one story, about the trials of one specific lion cub, that you complete fail to notice the context in which it all takes place – and that context, along with the overall messages of the film, is completely messed up.

This isn’t me overanalysing some subtle theme or sub-text either. Nah this stuff is right there, right in front of your nose from the very first scene. You know, the one where the subjects of a murderous tyrant are forced to gather and pay homage to his successor, who will one day grow up to rule (and murder) them in turn.

Don’t remember that scene? Allow me to refresh your memory:

KNEEL TO YOUR OVERLORD!

It’s quite a testament to Elton John’s abilities as a song writer that he not only distracts you from the implicit horror of the scene, but actually convinces you this is wonderful and uplifting. Try imagining it in context, without the music – or for maximum effect, chuck a bit of this on in the background and see how you feel about it all.

Yeah, funny thing about that circle of life Mufasa likes to go on about – it seems more like a line. A line going straight into his mouth. See while it’s very true that lions die and feed the grass that their prey then eats, that line tends to gloss over the facts that;

It’s the Circle of Liiiiiiiife!

Right about now is the time when people will start up with the ‘it’s just a movie’ argument. And yes, it is just a movie. For children. That encourages you to empathise with a king that not only murders his (talking, thinking and feeling) subjects on the regular, but has come up with a bullshit social order to justify it. It’s positively dystopian and you didn’t even notice until just now.

All hail the king

You know what’s fun? Monarchies! Who amongst us hasn’t fantasised about kings and queens, princes and princesses, big castles and knights in shining armour? And when it comes to monarchies, Disney is your company. Disney is so heavily into royalty that it’s hard to name a film of theirs that doesn’t involve some sort of noble blood in there somewhere.

And in the grandest tradition of Disney, The Lion King is positively dripping with royalty – we’ve got the mighty king of all he surveys, the loving and capable Queen, the heir apparent, the scheming uncle… aaaaand a whole bunch of the king’s concubines since generally only one male lion in a pride breeds at a time. 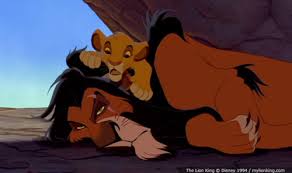 And you wondered why he’s bitter.

“If you were attempting to devise the worst possible system of government for a country, you would be hard pressed to come up with anything more stupid than the idea of a hereditary monarchy. The concept is appealing only in its simplicity; one man is in charge of everything: the government, the economy and the Church. That man’s qualification for the post is simply that his dad did it; he then rules his entire life, irrespective of how well he performs until the job passes to his eldest son, whatever his suitability for the position.

At best you would be concerned about the random quality of individuals that the system threw up. But of course it is worse than that, because the formula is almost guaranteed to create arrogant, blinkered and over-protected individuals who have never been criticized, corrected or had to consider the possibility that they might not know best. In this sense the heir to the throne is possibly the very worst person in the entire country to become ruler.”

All starting to make sense now, isn’t it?

But that’s not how it goes in The Lion King! Sure, Simba is a spoiled, entitled, born-to-rule little brat when he’s a cub, and if nothing else happened you might be seriously worried about his fitness to rule when he grew up. But then his dad dies! And he goes to live with two wise men who widen his mind! And then he hooks up with his childhood sweetheart! And then he confronts his evil uncle and overthrows him!

And through the grand journey of self-discovery, tragedy and love he learns… sweet bugger all.

Of course this shouldn’t be all that surprising, because what was there to learn? Seriously, just look at Simba’s so-called ‘journey’:

His dad falls off a cliff and dies trying to rescue him from a stampede, from which Simba learns: to blame himself and flee into the wilderness in shame (which was kinda lucky for the stampeding wildebeasts that trampled Mufasa, ‘cause instilling that sort of trauma in their murderous ruler would not end well for them).

He meets Timone and Pumba who raise him to appreciate their way of life, from which Simba learns: to be lazy, shun responsibility and eat bugs. Seriously, that’s it. ‘Hakuna matata’ is the sum total of their lessons for him, and so eagerly does he absorb it that he avoids sucking it up and facing his guilt for somewhere between 5 to 25 friggin years depending on who you ask.

He meets Nala and falls in love, eventually getting his shit together and returning to pride rock and confronting his past. From this Simba learns: to let his penis do the thinking. The funny thing is that while Simba finally taking responsibility for his actions and his duties is a wonderful bit of character growth, he only does it because the his girlfriend withholds sex (or ‘love’ if you think literally one day of reunion after 5-25 years of Simba skiving off would be enough for that).

And finally, he confronts Scar, learning the truth about his father’s death, beats his uncle in a fight and sorta-accidentally throws him to be eaten alive by a bunch of his Hyena cronies. From this Simba learns: nothing much. What was there to learn? Never doubt yourself? Never trust uncles? Well there was one lesson in there – that banishing instead of killing your scheming uncle is probably a bad idea when he has his own private army – but sadly, this one kinda flies over Simba’s head.

And so, based on the lessons learned on this grand journey of self-discover, Simba matures from a self-entitled brat into… exactly the same person with the added bonuses of 5-25 years of internalised self-loathing, 5-25 years of laziness as a philosophy, about a week of following his dick, and one very intense moment of accidental murder. Oh yeah, this guy is perfectly equipped for the demands of leadership.

But sure enough, as soon as Simba takes the throne pride rock goes through a pretty dramatic change for the better, demonstrating once and for all just how great a king he is! How the hell a freakin’ lion is meant to have created and/or ended a region-wide ecological collapse is a point left unaddressed.

This is less ‘overhunting’ and more ‘Hiroshima’, guys.

Oh, and speaking of Scar…

This is why you don’t ignore the underclasses

You know who the real victims of this whole mess are? Apart from literally anyone who isn’t a lion? The hyenas. Yeah that’s right, the dirty, stinking, crazy scum that follow Scar and help him put all his devious plans into motion are the characters most deserving of your sympathy in this movie.

But that’s absurd! These are clearly evil characters who attempt to kill Simba on no less than three occasions and aid Scar in usurping the throne! And they do it all so that they can… hunt on pride lands. Which are constituted of “everything the sunlight touches”. Huh.

But they didn’t deserve the right to hunt on pride lands! Mufasa banished them years ago the elephant graveyard. Why? Uh… dunno. The movie never covers that.

So… what we have then is a group of social outcasts, banished from seeking food anywhere except a literal graveyard for no specific reason, who then join up with the first person who treats them as anything more than garbage, and attempt to kill the heir to the tyrant that persecuted them in the first place. But they’re clearly the villains because they’re ugly.

All in all here, Scar is doing these guys a massive favour for pretty much nothing in return – this is a hereditary monarchy, remember? It doesn’t matter what sort of leader he is, the second Simba scarpered Scar had the throne locked down. For life. The only possible reason for letting the hyenas in on the action is out of the goodness of his own heart.

But even if we accept that Scar is the bad guy in the film – and frankly it’s debatable whether killing your brother is worse than freeing an entire species from his persecution – then the hyenas are still the real victims here. In the worlds of the esteemed ‘Dickiedudeles’ from Reddit:

“The Lion King is a film about the dangers of inequality and what happens when you have a poor, uneducated and disadvantaged underclass (the hyenas). You can keep them in a dark corner of the kingdom and use your power to keep them marginalized but they’re always going to cause problems and sooner or later someone will take advantage of the uneducated masses in a struggle for power and then not even kings and princes are safe.

If society had realised that starving people without hope eventually become everyone’s problem and therefore need to be everyone’s responsibility Mufasa might still be alive.”

All of this would indeed imply some true genius on behalf of the film’s writers… if it were referred to once in the entire film. But no, what we get instead the entire way through the film, is a story about the heir to a tyrannical throne (which he gets and keeps regardless of merit), who runs for it the very first time he has to do anything other than what he wants to, who then slacks off for 5-25 years, only returning home thanks to the power of boners. He then accidenti-murders his uncle, who took advantage of an underclass his father created (and ending that injustice simply because he wanted to), and takes the throne to rule with somehow less wisdom than he started with.

Rejoice! For tyranny has been re-established!

So that’s The Lion King. I hoped you enjoyed it up until now, because enjoying from this point onwards is like cheering on Stalin, if Stalin literally ate people.

Don’t even get me started on this bullshit.

Enjoy this little rant? Then feel free to suggest another beloved childhood memory for me to savage over the next three weeks.

4 thoughts on “Childhood Carnage: The Ethics Of… The Lion King”