If you’re over 17 and capable of reading this then you remember where you were. I was in bed, waking up for another school day. I remember the radio going off as my alarm and the news reports starting to filter through my fuzzy mind until I was, for possibly the only time in my entire life, paralysed with shock. I remember stumbling out of my room, barely dressed and finding my parents already watching the replays on the TV – that now timeless video of a smouldering World Trade Centre, captured by a confused and terrified New Yorker at the very moment the second plane hit and immediately removed all doubt that this could have been an accident.

A few hours later we watched at school at both towers of the World Trade Centre, an iconic landmark or the iconic city of New York, of the even more iconic nation of the United States of America, collapsed into dust.

It felt like the world as I knew it collapsed alongside it. 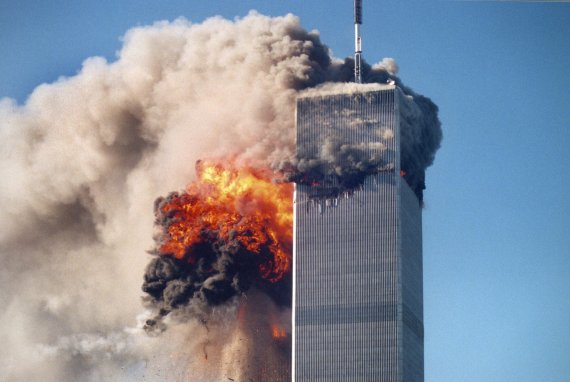 There were plenty of questions flying around that day and for months afterwards. ‘Who the hell is responsible for these attacks?’ being very high on that list, since al-Qaeda bucked the trend of terrorists and took a few months before claiming responsibility for the attacks (and weirdly took until 2004 to directly say so). But above all other questions that day, louder even than fears about future attacks or the fates of the victims inside the towers, was one simple word:

Why did this happen? Whoever was responsible for these attacks, why did they do it? Why do they hate us so much? For god’s sake, WHY?

15 years down the track this might seem like an odd question to ask. Between George ‘is-he-really-that-stupid’ Bush, two incredibly expensive and ethically questionable wars, Guantanamo bay, ‘enhanced interrogation’, extra-judicial execution, the Patriot Act, a decade of chest-thumping jingoism and the destabilization of an entire international region, there is no shortage of anti-Americanism in the world these days. Hell it was a running joke during the Bush era. USA tourists used to pretend they were Canadian, so savage and automatic was the disgust with their country.

But you have to remember that in 2001 the USA was generally considered to be absolutely friggin’ awesome. After the USSR finally gave up in ’91 the USA officially became the winner of the greatest ideological, economic, cultural and military struggle the world has likely ever seen, and they spend the rest of 90’s making sure that absolutely everybody knew it. The European Union was a new concept and China was still getting to grips with the radical idea of ‘trade’, so it didn’t matter if you were talking about business, entertainment, politics, fashion or even language – the USA was #1 and had no rival in virtually anything it did.

Sure there was criticism; the lack of opposition lead many to worry that the USA would quickly come to dominate every part of life on earth – ‘cultural imperialism’ was the phrase. The undisputed victory of Western capitalism also lead many to worry about the long-term harm such policies might cause now that its only serious rival philosophy was effectively dead. US-led peacekeeping efforts like those in Bosnia, Croatia, Somalia, Haiti and Yugoslavia lead to the half joke that the USA was now the ‘World’s Policeman’, with many worried that these humanitarian efforts were too aggressive and might lead to less benevolent US military intervention in the future.

Of course looking back on these criticisms 15 years later, they largely seem like a tragic mix of jealousy and nativity. When the best snipe you can take at a nation is that “Its culture is too popular” and that “It’s too eager to use its military for humanitarian goals”, then you’re really scraping the bottom of the criticism barrel. And how terribly quaint such quibbles now seem after the diplomatic, economic and military quagmire the USA plunged into after 9/11 blew the entire world’s concept of ‘normal’ out of the water. A successful attack against the world’s greatest, most powerful, and generally well-loved nation. Once again we came back to that terrible question: Why?

Why would somebody do this? What possible justification could the attackers have for this? What had the USA done to deserve it?

Well, plenty as it turns out.

Alright, alright take a chill pill and let me clarify something before we jump straight to the lynching:

Am I suggesting that the actions of the terrorists were justified in any way? No I am not – even if their cause was just (and that’s a big damn ‘if’) such a massive attack on a civilian target is completely unjustifiable.

Am I suggesting that the civilians, fire fighters and police that died in the attacks somehow deserved to die? No I am not – neither I nor the terrorists knew a damn thing about the individuals killed, so it is absurd to suggest those people had it coming.

Am I suggesting that the 9/11 terrorist attacks were some sort of conspiracy/inside job/Illuminati cover-up? No I am not – sure the US government has toyed with false-flag attacks before, but there is no evidence whatsoever that was the case with 9/11.

So what exactly am I suggesting then? It pretty simple really. If the question we’re asking if “Why did the 9/11 attacks occur” or perhaps “What did the USA ever do to deserve the 9/11 attacks”, then you don’t have to look too hard for an answer.

As anyone with access to Wikipedia can tell you, US foreign policy has rarely been what you would call ‘nice’. In the Cold War years in particular it was clear that “The enemy of my enemy is my friend” was a popular mantra, leading them to support and arm any leader who opposed Communism and/or protected ‘the interests of the American people’. And if that leader happened to be a bully, dictator or flat-out psychopath that murdered and oppressed his own people? Such concerns came a very distant second to the safety and security of US of A.

In an era when a nuclear apocalypse was a very real possibility, such brutal pragmatism made a lot of sense regardless of the ethical problems it raised. But to say that such efforts were short-sighted is a massive understatement and many of them came back to bite the West. In Iran a US-back tyrant was overthrown by an Islamic revolution, leading to the unstable, probably-nuclear-armed rogue state that we now enjoy. Support for the Saudi monarchy, continued to this day, raised resentment among millions of Muslims living under the heel of these brutal overlords. And of course, the arming and training of Afghani resistance fighters (who we subsequently abandoned after the Soviets pulled out) provided the foundation on which Al Qaeda and Osama Bin Laden build their terrible legacies. All of these decisions coalesced into the perfect storm that would, years later, set the planes in motion towards the towers in New York.

In terms of ethics, these decisions were a form of utilitarianism – the means may indeed be terrible, but they are worthwhile in the service of the greater good. The citizens of our allies may suffer, but such is the price of freedom and security. But this approach also highlights one of the major problems with utilitarianism; it is very easy to corrupt. All you have to do is ignore information that you don’t want to hear, and you can justify just about anything to yourself.

Was the US Government alone in this behaviour? Most definitely not. Any nation with influence was using it to secure their interests, dominate the weak and ally with the strong – compared to the way the Soviets went about this, the USA was practically saintly. But does bad behaviour being normal excuse us from responsibility? Of course not. As I’ve discussed on here before, responsibility cannot be divided, but must rather be calculated on an individual basis – if you have the capacity of prevent harm and act more ethically, then it doesn’t matter what anyone else is doing; you and you alone are responsible for the quality of your conduct.

So what am I getting at here? Am I trying to suggest that the USA deserved the 9/11 attacks? Well that really depends on what you mean by ‘the USA’. Given the ugly context that lead up the attacks, it’s tempting (even fashionable in some circles) to suggest that 9/11 was simply the sins of the nation come home to roost – the USA had finally reaped what it had so ruthlessly sowed throughout the Cold War, and had no right to cry foul, much less stage a military stampede through a third world country the Soviets had only just stopped kicking the crap out of. And frankly, I think this is a very good point.

But there’s a pretty serious problem with this; specifically, who is the USA? Sure the nation may have done terrible things, but a nation is just an abstract idea comprised of millions of people over hundreds of years. So what we’re really saying here is that terrible things were done by people who were part of the United States, which lead to the 9/11 terror attacks being perpetrated against other people who were a part of the United States. Suddenly the idea of the US ‘deserving’ 9/11 doesn’t make all the much sense anymore, does it? How can one group of people deserve to be punished for the decisions of another group? If a nation can deserve to be hurt for its sins, then how does that balance out against all the good the USA has also done for the world? And what about all the other nations that participated in similar shady behaviour? Do they deserve punishment as well? Because if modern day Australians have to pay for the sins of our ancestors, life’s about to get pretty ugly.

But if the nation itself isn’t really a thing, then where does responsibility lie? The decisions were made after all, so it has to lie somewhere. The government is the obvious choice here since politicians set the policy of the nation, they are generally considered to speak for the nation, and they also make a nice fat scapegoat for citizens to point the finger at. But even if you somehow manage to figure out the specific set of politicians who made the decisions that lead to the events leading up to September 11, we run into yet another complication unique to the West, and to the USA in particular: democracy.

Sure, you can blame terrible foreign policy on the politicians. You’d almost certainly be right to do so. But no matter how terrible, stupid or short-sighted your politicians may be, the inconvenient fact remains that they were elected. And as such, everything they did for good or ill, they did using the power granted to them by ordinary citizens.

The September 11 attacks were a vile act of terrorism against civilians who most certainly did not deserve to die, and against a global community of people who frankly, would never feel quite as safe as they once had. But however unjustified, these attacks were the result of certain causes – causes that the USA itself largely put into motion through arrogant, selfish and short-sighted foreign policy. While it is absurd to say the USA deserved 9/11, the fact remains that the attacks were in large part the product of its government and that this government was the product of the people. Whether we like it or not, the decisions we make today will have great implications for the future, especially when it comes to something as drastic as military intervention.

In a year when Australia may bomb Syria to get our Prime Minister some positive press, and there’s a decent chance Donald Trump might be the next US President, the message has never been clearer: we must make the right choices today, if tomorrow is to be free from fear.