Ah, streaking. That good old-fashioned Australian activity whereby one or more citizens embody the very essence of our cultural disregard for authority, willingness to put their body on the line, and desire to entertain their fellow man. Or to put it another way, that time Davo got wasted at the cricket, took all his clothes off and disrupted the entire event for giggles.

Earning himself a dick-spanking and a $6000 fine for his troubles.

For those who missed it, the noble art of streaking was taken to a new high (or low depending on your perspective) yesterday when a 52-year-old grandma got down to her undies, and ran around at the Oaks Day races in the middle of a thunderstorm, all over a $10 bet. Naturally, this made national news in short order and at least one of her grandchildren is threatening to defect to Thailand.

All in all this… incident was considered completely harmless and taken for the fun it was meant. There will be some moral crusaders out there tut-tutting, calling talkback radio and going on about ‘decaying standards’, but since the things those people tend to approve of can be summarised as ‘regressive and boring’ they’re hardly worth paying attention to. The vast majority of people who either witnessed this in person or heard about it elsewhere would have reacted in one way; mild embarrassment and good humour. Even if grandma had have actually gotten totally nude the reaction wouldn’t have changed that much – we’d just add a dose of ‘oh GOOD god’ humorous-outrage to the mix, had a laugh and gotten on with our business.

But streaking and our reaction to it has always seemed a bit odd to me. Imagine getting nude and taking a walk down the street to your local supermarket. Imagine the reaction you would get from anyone you saw along the way, drivers passing you on the road, and finally, the staff at the supermarket once you got there. Imagine some of the things that would get yelled at you. Imagine how quickly you’d earn a lifetime ban from the supermarket. And imagine how far you’d get before you found yourself taken to the local cop shop for a nice little chat about “our public indecency laws what you done broken, mate.” 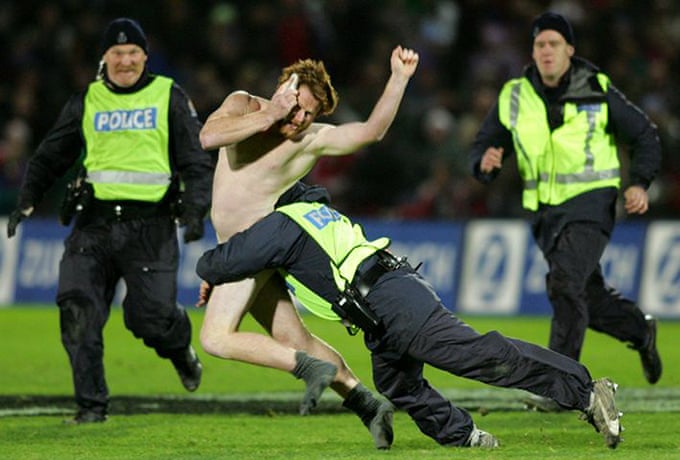 Officer Moustache seems to be getting into it though.

Needless to say, between the charges, the fines, the banning, the insults and the shunning you’d get from the entire community, you’re unlikely to try your little jaunt twice. And that was just to walk down the street to pick up some groceries. Isn’t it a little bit weird then that ripping off your clothes and charging out into an internationally televised sporting event, in front of a crowd of thousands, disrupting an extremely important and expensive event in the process, is somehow considered a better thing to do? Hell, 90% of people would consider you an absolute legend for doing so.

The question that hangs over all this is clear; why do we react so differently to the same nudity in different situations? And why are we happier with that nudity when it’s more disruptive? There are a bunch of potential answers to this – perhaps it’s that streaking is a tradition we all know the rules to, whereas a naked person in the supermarket is totally out of left field. Maybe the fact that streakers are a long way from the spectators makes the difference. Or maybe it’s just that we know that a streaker is basically guaranteed to be tackled by security within the next 5 minutes, so they can never get to close…

Any of these are viable explanations, but the sheer fact that we are fine with public nudity in one setting and not in another raises a much bigger ethical question: what exactly is wrong with nudity?

Now I’m not suggesting that people aren’t totally grossed out by naked people – they most definitely are, at least in any situation where they don’t get to choose to see naked people and have some control over how attractive the naked people are. Suggest to anyone to image of a nude person wandering about their neighbourhood and they will, almost without exception, go “Ew!”. Go that step further and suggest that they take a walk around outside without clothes on and they’ll practically blanch with fear – even those who don’t see the shame of the act would balk at the reaction they’d get from anyone that saw them. But while public nudity is definitely a taboo, all this boils down to is a great big practical reality, and just because things are a certain way does not mean they should be.

So let’s bring this back to the principle-based question; is there anything actually wrong with public nudity?

The obvious answer I can hear you screaming at me is that it’s gross. And if by that you mean that the vast majority of people would really prefer not to have to see naked people in public – especially when you consider the average fitness going around – then you’d definitely have a point. But here’s the problem with that; whether or not we like seeing someone do something is a pretty shitty basis for banning them from doing it. Sure you might find nudity gross and so might most of the Australian public, but so what? Are we going to start banning things that aren’t popular now? Start shaming and ostracising people who fall outside the mainstream? If you’re willing to stop people from being naked in public because you don’t like it, then what will be your defence if public opinion turns against something you enjoy?

Hope you enjoy boy bands, because that’s what’s popular, so that’s what you’re going to be listening to.

Much like musical tastes, the things that we do and don’t like to look at are subjective – they only exist in your head and any ‘harm’ they may do can be fixed by a change in attitude.

So are there any other reasons public nudity might not be justifiable? Well there’s always the whole sex offender thing, isn’t there? Have a hard think about that ‘naked person goes to the supermarket’ story I told you up there, and ask yourself what about it precisely makes you uncomfortable enough to want to stop it? Get past the cringe factor and odds are good your worries are based on the idea that naked person might decide to get a bit too close for comfort. It’s hardly a surprising worry given the existing disgust towards the idea of public nudity, not to mention the vast majority of us have ‘naked’ and ‘imminent sex’ pretty tightly tied in our minds, but this fear could have a lot more justification than issues of taste. Sexual violence is a serious issue in Australia and most other nations and the potential threat of attack tends to loom over many in the community – considering the stats, women, parents and the elderly all have a pretty decent cause to be suspicious of a naked person where a naked person traditionally should not be. People who ‘flash’ others have also been shown to be likely to escalate the behaviour into more serious acts, meaning odds are good that our naked shopper has some pretty bad intent behind them.

These are all objective facts that paint a solid reason for people to worry about people who get their kit off in public today. But you might also notice that these aren’t really objections to public nudity itself – not a criticism of the behaviour itself so much as what it might lead to given everyone who currently does it is a deviant by definition. As we’ve discussed before, statistical truths like this can be deceptive if you don’t put them into context. Statistically it may be true that people who get naked in public are potentially dangerous, but is this because the public nudity causes people to become dangerous, or are dangerous people simply more likely to not give a shit about convention and taboo? And if the taboo was to suddenly no longer exist, would everyone who decided to get naked for non-malicious reasons suddenly decide to get their creep on? I very seriously doubt it.

Huh. Suddenly getting the urge to compromise my entire life by committing a horrific act of violation. Must be because I’m naked.

Of course there is one last principled objection you’re likely to get to the suggestion public nudity should be allowed: what about the children. If you’ve ever even been nearby to a debate about ‘decency’ or topics even remotely sexual then you’ve heard some pillock try this argument out for size. “How dare you suggest that *anything remotely sexual* be allowed in this country! Don’t you know that there are children out there who will be exposed to your filthy smut?! What a revolting idea to suggest that your personal perversions are more important than the safety and innocence of our beloved children! How DARE you suggest we allow you to corrupt the future of this great nation?” etc, etc, etc.

The fun thing about this argument of course is that the ‘children’ that the objector claims to be defending have a tendency not to actually exist – they’re just a useful proxy for the objector’s own personal preferences. I know this might seem a radical concept, but it turns out that children are humans too and as such have sexuality inbuilt in ways that we are still discovering. Research, referenced by child safety organisations no less, shows that even infants are sexual beings and that an awareness of bodily pleasure, gender and relationships pervades the entirety of childhood. Hardly the ‘pure’ sexless entities that your average moral crusader would have us believe. Given this, denying children exposure to facts about the human body is not only stupid, but it can actually lead to them developing some fairly unhealthy attitudes towards their own body and sexuality in general – attitudes like the idea that nudity is something that we should be ashamed of, despite the fact that it causes zero objective harm to anyone.

So where does that land us? Is there anything ethically, principally, objectively wrong with public nudity? Well no. No there is not. Sure there are a bunch of practical factors that mean naked people in public NOW might need a wide berth, and these same practicalities mean getting your gear off this second and going for a saunter down the street might not be a very good idea. But practical factors can be overcome, and if some of us would quite enjoy getting around without their gear on then what basis do we have to deny them that?

It’s time we got with the program and joined our European friends in embracing the freedom to go naked if you want to. Let’s see that same enthusiasm we showed for 52 year-old grandma having a good time yesterday and extend that goodwill to anyone else who feels inclined to give it a shot. Sure it might make you feel uncomfortable and you sure as hell might not want to get involved yourself, but that’s your choice to make – why should we deny them theirs?

So Australia, time to conclude this article in the most fitting way possible: a picture of a bunch of naked people. Deal with it. 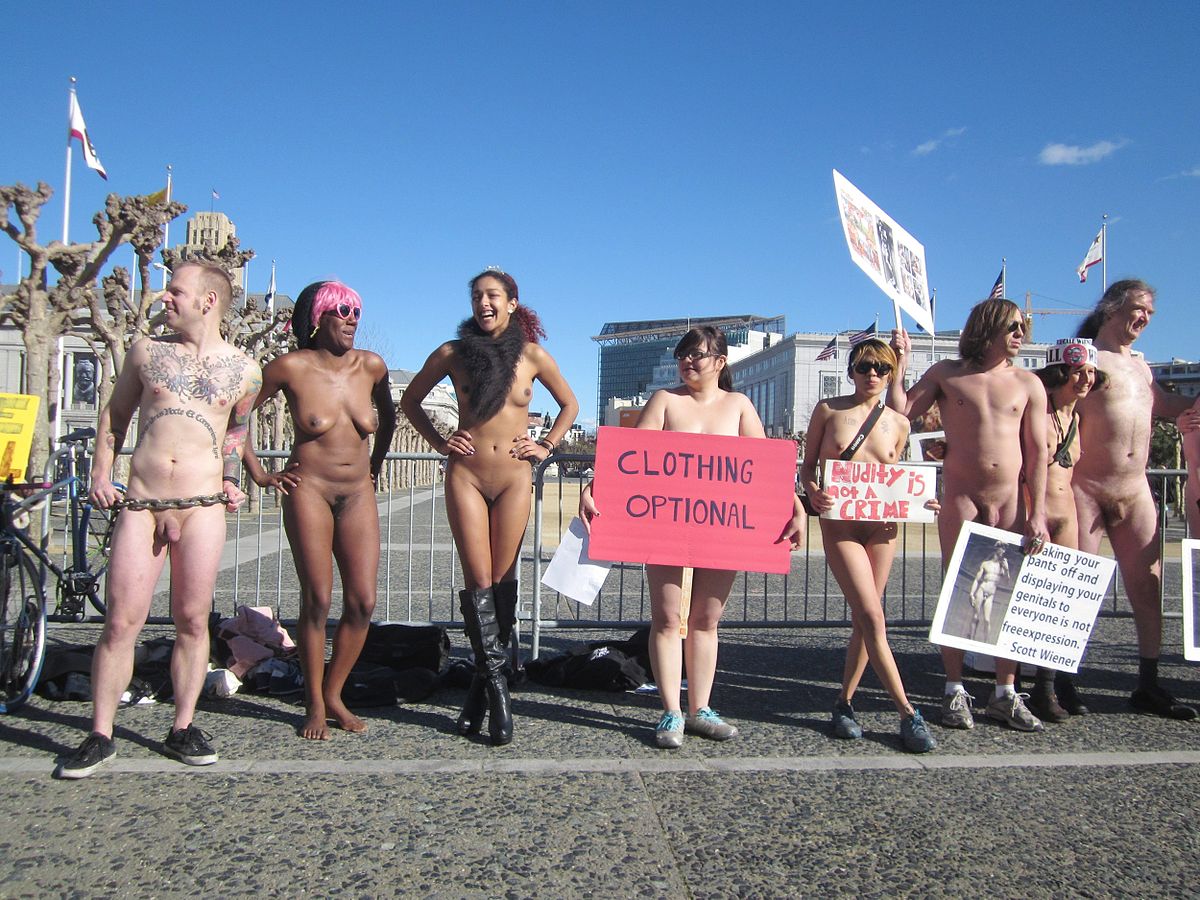 Look! A penis! And breasts! Things people spend over $4 billion each year to see! Things that nearly every human being alive has attached to them! Truly the end times are upon us!