For those that missed the last couple of weeks, life has gotten kinda busy all of a sudden, so doing some shorter articles. Apologies for the general lack of prose going on here (I’d also apologise for the spelling and grammar errors, but at this point that’s a lost cause).

Australia has a federal election coming up this weekend, so I figured it’s time to have a look at a couple of the weirder aspects of our democracy and why they’re important. Last week it was preferential voting, this week it’s compulsory voting.

It’s more interesting than it sounds, I swear.

Depending where you’re reading this from, the idea of compulsory voting is going to get some pretty contrasting reactions. For Australians being legally required to turn out for election day is just the norm, but as it turns out we are one of the very few countries in the world that do this, and many other places find the idea horrifying. Suggest it to an Englishperson and you’ll get laughed out of the room. Suggest it to someone from the USA and they’ll stare at you like you just set the Constitution on fire with a banned gun.

Of course everyone agrees that the right to vote should be available to everyone in a democracy. But the idea that the government can force people to participate in an election, on threat of a (fairly tiny) fine and potentially jail if they refuse to pay it, comes across as bizarre if not outright ominous.

There are dozens of good reasons for not wanting to vote. What if you don’t like any of the candidates? What if you seriously oppose all of the candidates or even the election process itself? Maybe you think the entire think is corrupt and want serious reform. Or maybe you just have no interest in politics, have no idea about who stands for what, and don’t want to be forced to vote for groups you have no clue about?

Compulsory voting is often defended as a Citizen’s Duty, along with paying taxes, obeying the law and jury duty, but the obvious counter to that is that it stomps on quite a few of your Freedoms and/or Rights as well. Libertarians naturally get pretty angry about the entire deal, but then again Libertarians won’t be happy until we let ‘the market’ rule as god-emperor, so that doesn’t mean too much.

Overall the whole question of duties, rights and freedoms smacks too much of simplistic deontological rules to me, so safe to say they aren’t helpful and we can ignore that entire angle on the topic. After all, there are obviously circumstances where it’s beneficial for the government to force us to do things, and as long as the voters have control over the government to stop them going nuts, all is well. That’s basically how every functioning country works.

So if we’re ignoring big, simple ideas like ‘rights’ and ‘duties’, then how can we justify forcing everyone to vote?

Easy! Because it works, that’s why.

A question for you: if you don’t vote at an election, why should politicians care about you? If you might vote for them, then they need to make sure they appeal to your interests. Hell, even if you vote against them they need to worry about why and try to attract more people to their side to compensate. But if you refuse to vote, make it clear that you are not participating in this process for whatever reason, you know what a politician sees? Someone they don’t need to bother about.

Have a look at the USA, where the current presidential nominees for the only two parties that matter are a racist muppet in a toupée, and the wife of a previous President who very well may be arrested before she gets elected.

The Ruling Class versus the Redneck Vote.

Both Trump and Hillary are both despised by more than 50% of people in the USA, yet here they are lined up to take leadership of the nation for at least four years. How the hell is this possible? Well for one the US first-past-the-post system means you can only realistically choose between the two major parties. And for another, voter engagement in the USA is unbelievably low, with only slightly more than 50% of its eligible citizens voting. This not only means huge portions of the public are failing to have their voices heard in who gets elected, but that both candidates safely ignore them during election promises and policy creation once elected.

Compare this to Australia where 93% of our citizens are enrolled and voter turnout for elections hasn’t dropped below 90% since the 1920s, and you can see the power of compulsory voting in creating engagement at least. Oh sure we still get plenty of folks who don’t enrol in the first place, or who deliberately mark the ballot wrong (called ‘Donkey voting’ for some reason), but the difference is still dramatic nonetheless.

So why is forcing thousands of bored people to participate in elections a good thing? Because even if those people aren’t all that interested in who gets elected, if forces politicians to be interested in them. As a result the policies they end up going with tend to better represent the will of the entire nation rather than the hardcore nutters that actually want to vote. This in turn means the politics of Australia are waaaaay less extreme and partisan than in the USA, because while your average Joe may not have strong feelings about tax reform, they sure are suspicious of idealists and tend to favour moderate approaches.

This was the last Australian politician to drive a strong ideological campaign (pictured here eating a raw onion for unknown reasons). It did not end well for him. Or anyone really. Imagine Ronald Regan, if everybody hated him.

Even more important, compulsory voting makes it extremely difficult for governments to stop some groups from voting. If voting if voluntary then this is easy; just make voting too difficult, time consuming or complicated for people to bother and you’re effectively preventing big groups of people from being involved – poor people, the homeless, people in casual jobs, people away from polling centres, parents, young people, all of these are easily cut out of the equation just by making voting a little too hard for them to do. And when those groups are unlikely to vote, guess what? Politicians don’t have to give a shit about them!

There are somewhere between 500,000 to 1.6 million homeless people in the USA right now, and less than 10% of them vote on average vote in elections. Imagine what would happen if that figure jumped to 90%? It may not be a game changer, but you can bet your arse we’d see candidates paying a lot more attention to the homeless vote, that’s for damn sure. 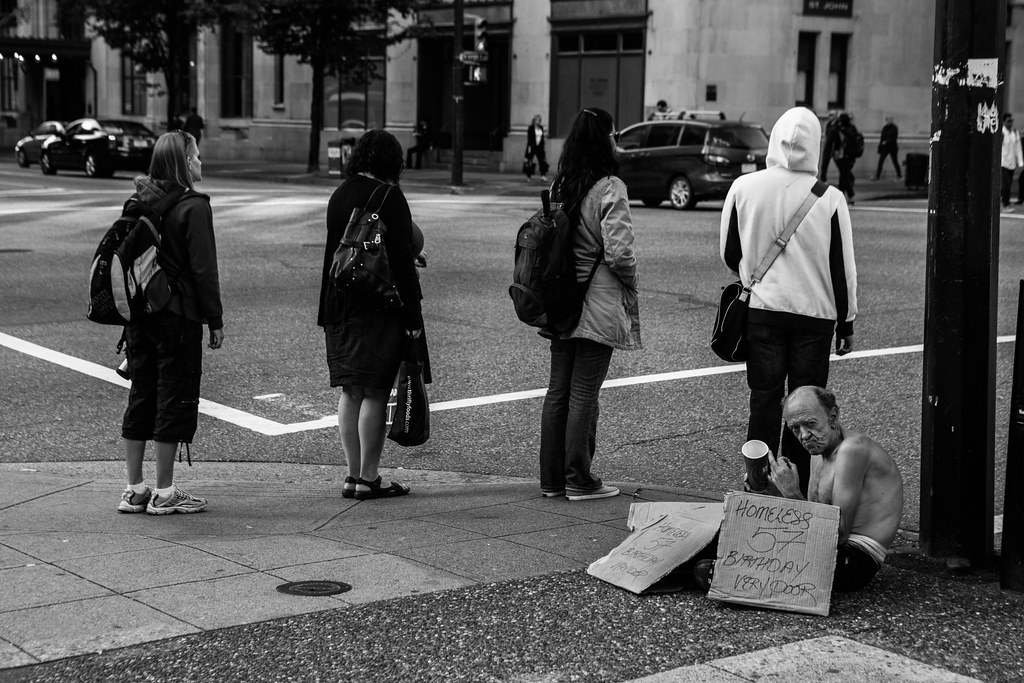 Harder to ignore someone when they have something you need.

Don’t get me wrong here, I completely understand why people are so disengaged with politics these days – smug gits in suits who repeat the same stupid, meaningless rhetoric over and over until your ears bleed do not make for a fun time. Better to tune out, get on with life and try to ignore the whole farce, right? Why bother voting when everyone is a wanker and your vote will hardly make a difference?

But whether you like it or not, politics doesn’t just stop when you don’t pay attention to it. Governments will be elected and make decisions about how the country is going to be run – and one way or another these decisions WILL affect you. The one and only way we can control these pricks is by letting them know that we are watching them, and that we will strip them of their power if we don’t like what is going on. When we choose not to vote we not only give up that control, but basically tell politicians that they can do whatever they want, and we won’t do anything about it.

This must not be allowed to happen, and compulsory voting is by far the best way to ensure that it does not. When voting is voluntary, political groups can chip away at your interest, your resolve and thus undermine the accountability that keeps their powers in check. Only by forcing the people to pay attention can a decent level of accountability be maintained, and if that means forcing you out to a polling booth on a wet Saturday then so be it.

Suck it up ya sook, it’s the very least you can do for your country.

One thought on “The Ethics Of… Forcing People to Vote”