It isn’t a big secret that being white is a pretty sweet deal. Ever since the beginnings of the Colonial Era, there have not been many places on earth where simply being a white person isn’t an immediate bonus to everything from income, to land rights, to legal status right through to simple social status.

For the past 500 years, western culture has been the undeniable dominant theme of human history and even today with the Asian nations starting to catch up, the fact remains that if you’re born white, you automatically have a better chance of being healthy, wealthy and educated, not to mention safer and equipped with opportunities that even our white ancestors would marvel at.

On the other hand, no one ever lets you forget it.

You don’t have to be a hood-wearing, Reclaim Australia bigot in order to get the feeling now and again that a large portion of the world dislikes you simply because you enjoy these white-person privileges, or even outright blame you for their troubles. Whether it’s protesters stereotyping all westerners as exploitative, or aid workers always going after you for money on the basis that you’re ‘very lucky’, or even just a nasty comment from a non-white beggar when you turn them down, the feeling is the same – white people are the problem.

Different people react to this is different ways. Some react against it and stereotype right back. Others get a full-blown case of ‘white guilt’ and start throwing money at the problem. Most of us though, just go about our day-to-day and try to ignore the niggling doubts in the back of our heads.

The problem is that privilege can often can be hard to actually notice when you have it, and it’s even harder to actually do anything about. Being white definitely has its advantages, but those advantages aren’t the result of anything I personally did – they sort of just came with the skin colour I got dished out at birth. And while I want other peoples to have the same quality of life that I do, and abhor the racism and bigotry that causes such suffering for others, I’m not actually the cause of those problems and being lumped in with the people that do cause those problems just because of my family background? Well… frankly it smells a bit like racism.

All in all this is a confusing position to be in. White people did a lot of bad stuff in the past, sure. Some people who are white are still doing a lot of bad stuff as well. But I’m not one of those people, so I’m not responsible for it, right? But bad stuff happened and I feel like I should try and make up for that… but what can I actually do about it given I’m not causing it? Give my money away? How much do I need to give to cover my responsibility, assuming I have any? Am I meant to give up my quality of life in solidarity? Because that just seems like it would leave everyone disadvantaged.

A good example of this uncertainty coming to fruition was the debate around apologising to the Australian Aboriginal peoples back in 2008. For those overseas, when the English colonised Australia they didn’t just go the usual route of stealing the land from the native people by force – they realized it would all be a lot cleaner legally if they declared that the people there were actually too uncivilised to be considered humans, and therefore the land was terra nullius and therefore up for grabs. Unsurprising this did not set a good precedent and all sorts of really really nasty shit went down for the next 200 years.

With the exception of a very few arseholes, these facts of all this are undisputed. Was was disputed, and quite heavily so, was whether or not the modern Australian government should formally apologise to the Aboriginal peoples for these hideous crimes. When the idea started getting momentum the conservative government at the time dug its heels in, with the Prime Minister stating “I do not believe as a matter of principle that one generation can accept responsibility for the acts of an earlier generation“, and famously calling for people to stop taking a “black armband view of history” (despite his huge enthusiasm for ANZAC Day, but that’s another, much more dangerous post). Once this government was voted out, one of the first acts of the new socially-liberal government was the Apology, to great enthusiasm by left-wingers, and much anger from the right.

The narratives going on at the time spoke loudly of the confusion most white Australians felt, and still feel, about what it means to be white; many were angry that we personally were being blamed for the actions of past generations. Others saw it as making up for sins of the past and the first step towards true reconciliation with the Aboriginal peoples. Everyone agreed that, for better or worse, this was the harbinger of big changes. 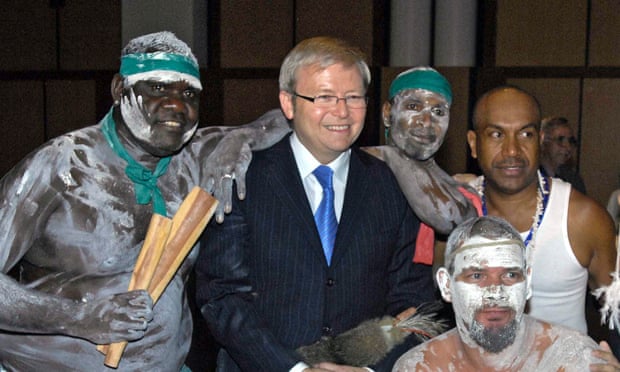 It wasn’t. The Apology came, the Apology went and nothing changed.

So was it all a waste of time? Did we shoulder our ancestors’ guilt for nothing?

No and yes. The Apology serves as perfect example of what happens when we try to deal with a complex, emotional issue reactively. The fact was that white Australians didn’t have a clue what our relationship was to the issue, so when we tried to do something about it, we all screwed it up in our own special ways.

Those who took on the responsibility for our ancestors crimes felt guilty over it and tried to make up for things, historically by throwing money and unrestricted support at the Aboriginal people, unsurprisingly leading to the standard situation of welfare dependence and substance abuse. Without a clear idea of what we were trying to achieve, we simply gave without limits or results, and never touched the underlying problems.

Those who refused to be held responsible for historical wrongs on the other hand, dug their heels in and refused to give an inch. We are not responsible. We owe the Aboriginal people nothing. The situation they are in is terrible, yes, but nothing to do with us.

And in this they were largely correct – for individuals to shoulder the crimes of past generations is ridiculous to say the least – but in rejecting responsibility for themselves, they pushed it back onto the Aboriginal peoples, suggesting that it was their responsibility to improve their lot.

What both these approaches overlooked is the same thing that nearly all white people overlook when they struggle with what it means to be white; while we are not responsible for the crimes of the past, we benefit directly from them.

To put this in perspective, consider this example;

Someone breaks into your house with a gun and forces you out before occupying it themselves. There are no cops in this town, so without a decent weapon you have no choice but to accept the situation and live on the street – naturally your quality of life plummets.

The simple answer from an ethical point of view is ‘yes’, but in practice things are a hell of a lot more grey. The people living in the house now had nothing to do with their ancestor’s stealing it! Why should they feel responsible for your family’s terrible quality of life when it was their ancestors fault? And imagine trying to tell the occupying family that, not only must they vacate the house, but should also pay your family compensation for 200 years of suffering from living on the streets!

The ethics of the situation are clear. The practical reality is messy as hell.

What does that mean for you and me doing our day-to-day? Usually not a lot. But by understanding this historical reality that all the privileges we enjoy as whitefolk were built on crimes that still cause huge suffering today, we are able to find a unique perspective on what it means to be white.

We are not responsible for those crimes and feeling guilt for them is pointless, but we do benefit from them at the expense of others. We cannot do much to directly change things now, but we do have a very clear duty to try to do so.

This change in perspective may sound small but it can have quite profound results in practice. The next time you come across a racially-charged situation, maybe a debate about multiculturalism or foreign aid, someone hanging shit on another ethnicity, or just a protest against ‘westerners’, simply knowing firmly where you stand as a privileged white person can make all the difference in how you respond.

Knowing that you have a duty to help improve the lives of other, but should feel no guilt for the crimes that caused those injustices, not only means you’re more likely to contribute positively to the state of the world, but also makes you less likely to try to help in ways that are ineffective, condescending, or even make things worse.

9 thoughts on “The Ethics Of… Being White”