You know, if I was to list off all the things I’ve done in video games, I’d sound like an outright psychopath.

I’ve killed people in their thousands and cheered others on while they do the same. I’ve killed them in every conceivable way – shot them, electrocuted them, bludgeoned them with a massive array of historical implements, dropped stuff on them, and burned them alive and relished their agonised screams as a reward for a job well done.

And that’s all been part of the normal, intended gameplay. We’re not even talking about the creative stuff yet. 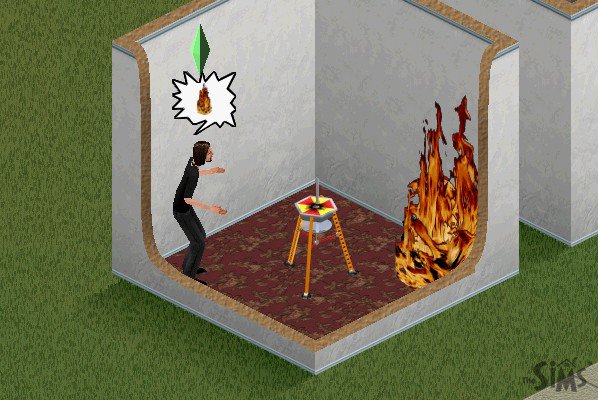 Gaze into the abyss and the abyss gazes back into you.

That all sounds quite evil, but even if you don’t play games, don’t get judgy yet – you’ve experienced all the horrors and more vicariously through your TV screen or pages of a book. Murder most foul. Slaughter most horrific. Innocent men, women and children tortured all in the most graphic of ways all to provide you with a compelling plot for your hero to sort out (or fail to sort out, for extra credit).

This ancient English TV show about a sassy older lady detective features a vicious murder every single episode. Want to traumatise a kid? Put them in front of this and watch their innocence shatter as the scene cuts between grandma pottering about someone’s garden to SOMEONE GETTING BLUDGEONED WITH A HAMMER.

And yet we’re not. Really really really not. In fact we’re so universally opposed to the idea of real-life violence as a species that we’ve been actively working to prevent it, leading what is currently the safest period of time in human history. And yet you cannot deny, we really seem to enjoy a dude getting blown up. So what gives?

The obvious objection here is that entertainment isn’t real, and that we enjoy all the horrors because we know that no one was actually hurt. Ignoring the popularity of documentaries and re-creations of real life events, this argument begs the question why we keep making our murder simulations more realistic? Because if the way we rationalise our enjoyment of violence if by knowing that it’s not real, then you’d think we’d be pretty keen of making sure that was clear, right? But no – apparently we won’t be satisfied until it literally feels, smells and sounds like we are in the French trenches in 1916 gutting a German soldier with a trench-knife. 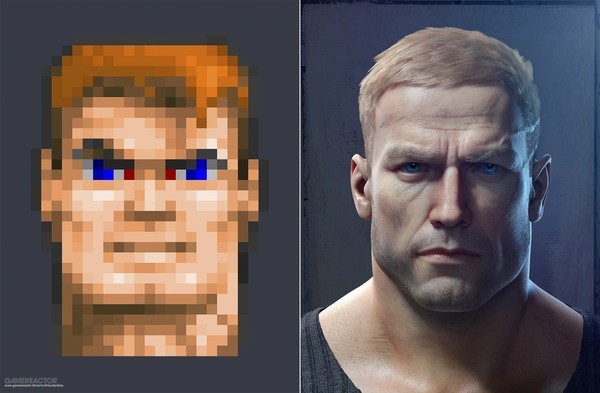 Which of these two would you prefer to shoot in the face? Because apparently it’s the one that looks more like a real-life human being.

Obviously there is more going on here. Is it simply that we want to be violent in real life, but can’t because of consequences? Maybe, but then actively working to reduce violence in our society would be an odd reaction to this, surely?

Perhaps it’s a way of experiencing the emotional highs and lows vicariously, without having to actually risk the safety or ourselves or others? I have no doubt that’s a part of it, but then again, why violence? Why not just stick with games/videos of people skydiving or other thrilling sporting activities? But no, apparently there’s something about exploding heads that we can’t do without.

Yeah we all recoiled in horror, but we sure as hell tuned in against next week, didn’t we?

There’s an additional factor at play here and I’m suggesting it’s really quite simple: there is a part of us, virtually all of us, that enjoys it.

Anyone with even a passing involvement with ‘masculine’ activities will know what I mean when I talk about warriors and the warrior’s code. For those that don’t we’re talking about as hardcore a set of deontological ethics as you can get: a strict set of rules about how a person should – must – conduct themselves, what ideals they must not just uphold but actively, rigorously pursue, and what acts and even attitudes they must never, ever stoop to. Those who uphold these rules, which are rigorously enforced by the rest of the community, are held up as paragons, heroes, honourable. Those who do not are low, cowardly, villainous and must strive to prove their worth again, assuming they aren’t simply rejected from the community.

Prime example of what we’re talking about here

Modern society may indeed be wonderful, peaceful and vastly better than living in a hut and dying of typhoid, but there is no denying that it is also very, VERY complicated. Where once 99% of human existence was based solely around survival, now we have to forge our own purposes in life – who are you? What are you good at? What do you believe in and why? Questions like these are guaranteed to set off an existential crisis, largely because they’re almost impossible to answer with any accuracy. Most of us are just winging it through life and screwing it up to varying degrees along the way.

War strips away this complexity completely: there is no time nor space for worrying about purpose, thinking causes hesitation, hesitation gets you and your friends killed by those who do not hesitate. No existential crises here, your purpose is clear: survive. Protect your friends. Kill the enemy before they can kill you. Follow the orders of those in charge so be better at all these goals. Do all this well and you will not only have survived, you will have succeeded.

No matter who you are, the appeal of this is obvious and powerful. Why? Because it offers you everything we so often struggle to find in modern society: purpose, community, clear and tangible goals, and most of all, a reward for their completion. For those of us bumbling along trying to figure out who we are and what the hell is expected of us in this crazy, infinitely complex world, this is like an oasis in the desert. Unfortunately in real life, that oasis involves a hell of a lot of blood, screaming and post-traumatic stress disorder. Assuming you make it that far.

And this is where violence in videogames and film comes into the picture: they give us the opportunity to live out this warrior mentality, to have our purpose laid out clearly before us, our goals listed and tangible before us, and to be equipped with the means to both achieve them, the certainty that we can achieve them, and to receive rewards for doing so – without the whole ugly business of actually having to go to war, risk our own skin and actually harm others (who, when we get right down to it, we don’t really have a problem with).

So… hooray for violent sport, TV and video games then?

Well, maybe. Unfortunately, sometimes we fail to keep that warrior mindset in the artificial boxes we built for it.

You ever wonder what could motivate this sort of crap? The fight alone is insanely stupid behaviour for any person who values their safety – the number of ways this could get anyone involved seriously injured or killed is massive. Hell, even a simple slap in the wrong spot can permanently deafen a person. Why ever risk it under any circumstances when you could run away, hide or even beg for mercy?

That said if this was a simple, fury and fear-driven brawl to kill and survive then that’s understandable, even if it is insane. But there’s even weirder stuff going on here, isn’t there? Look at the posturing before the punches are thrown, the hesitation – they both know what’s about to happen, they could both easily escape, and they obviously both know that they could get hurt going into it. And yet they still fight each other, and sure enough one gets hurt, maybe very badly.

Why? Well the answer is obvious isn’t it? Pride. More specifically, both these idiots found the idea of backing down far less acceptable to them than the physical harm they could receive in the fight. This is the ‘sense of self’ I’ve mentioned on here before – the values, beliefs and identity that we cannot compromise without causing ourselves serious distress, and which we will defend no matter how objectively stupid it may be to do so.

So what happens when, saturated as we are in violent media promoting the values of a warrior, we start to integrate those ideals into our own sense of self? When we start looking for simple purpose, clear and tangible goals, simple rules about what you can and cannot do, and start to apply these ideas in our extremely complicated and nuanced modern world?

Violence, that’s what. Because when you have trained yourself to uphold simple rules in a context where no one else is following those rules, you are going to find provocation at every turn, and you will react to that provocation as a warrior would.

And you will hurt somebody. Or worse, you will find a profession where that sort of approach to life is encouraged and rewarded, and perhaps realise too late (or not at all) that life wasn’t so simple after all.

Or end up looking like a complete dickhead. Could go either way.