Quick! Before you think about it too much, answer me this: what does it mean to be a man?

…OK how’d we do? What did we come up with right off the cuff? Don’t worry, it’s not a trick question; I imagine most of us came up with the usual list of characteristics – strength, toughness, courage, facial hair, and probably more dominance than we’re really comfortable admitting to.

Or maybe if you’ve spent a lot of time thinking about this already (or cheated and tried to guess the politically correct answer), your list was slightly more introspective – reliability, assertiveness, consideration, self-respect, etc, etc.

Or perhaps you’re a touch jaded with this sort of open-ended quasi-intellectual bullshit question, which are generally designed to trap the answerer into saying something slightly offensive so that the questioner can feel smug, and just said ‘having a penis and/or testicles’.

Or maybe (if you’re a sneaky bastard like meself) you just skipped all that and are wondering what the hell this question has to do with feminism in the first place? It’s feminism after all, right? Women’s suffrage. What does manliness have to do with it?

Well the inescapable truth is that feminism and the struggle for gender equality don’t just include men – they actually depend on them. See the tricky bit about being oppressed or otherwise disadvantaged is that the problem perpetuates itself; pulling yourself up by your bootstraps and fighting for equal rights is all very well and good, but it’s practically impossible when you don’t actually have boots to start with. Being disempowered by definition means that you lack the power to change your situation – fight the powers that be on those terms and you’re in for an arse-kicking.

And so, regardless of what the internet’s treasured ‘man-hating lesbian butch feminist’ trope might tell you, the vast majority of the movement has been based not on fighting men for power, but convincing those men that sharing said power is the right thing to do for everyone.

And so, whether we like it or not, no discussion about women’s right can afford to exclude men – and as a result, the definition of what a man is will alter that discussion a hell of a lot.

Think about those three broad categories of ‘manliness’ up there. How do you reckon subscribers to the old-school ‘dominant man’ are going to react to the idea that they share power with anyone, let along the statistically weaker and more emotional female? (For those who enjoy a good train wreck, google “the red pill” for a truly morbid example)

I’d like to apologise for associating this fellow with The Red Pill. I have no idea who he is, but he’s probably a very lovely person.

Conversely, how is that discussion going to go down with your more metrosexual, sensitive, modern man? Will being in touch with their feminine side help them empathise with gender inequality, or just distort the discussion in a different, but equally toxic direction? 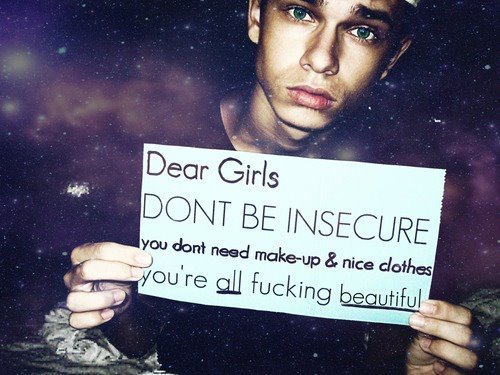 Remember how last week we talk about how sexual objectification tends to shape how women look at themselves? And remember how I mentioned that men get this as well, but it’s just a bit different in nature?

This is what I was talking about. ‘Manliness’ is basically sexual objectification for men. It’s a set of standards and norms that inform us of what we should and should not be doing, what is masculine and what is effeminate (as a fun aside, just think about what you associate with those two terms – kinda telling, isn’t it?).

And just like sexual objectification these sort of stereotypes are sort of unavoidable – I mean it’s not like there’s some sort of authoritative ‘Man School’ that clearly lays it out for you. In fact, there’s been a distinct trend in the last few decades to break down those exact sorts of guiding gender roles. And while this has been excellent for women, who now have vastly more career and lifestyle options open to them (my Grandmother for example had three career options: teacher, nurse or mother), it’s had exactly the opposite effect for men. And whereas the message is fairly clear for women (‘do whatever you want sister!’), men are in many cases still trying to sort out where the new boundaries are and what they’re allowed to do now.

Robbed of this comforting (if completely unjustified) position description for ‘how to be a man’, most are forced to resort to far less reliable authorities. Most will copy their father, which works until you hit puberty and realise he’s a total dag with no idea what he’s doing either. Then you might move on to your peers, but since most of them are also basing their manliness off their father and/or peers, this doesn’t help too much. And then there’s always films, TV, video games and magazines, which set a healthy standard of behaviour in much the same way that porn sets a solid standard for a relationship.

So men bob between these various sources and their own experience in deciding what it means to be a man – and consequently, how they should interact with women – and it should come as no surprise to anyone that they frequently screw it up.

Both men and women will have absolutely no trouble providing an example of a time a guy did something indescribably stupid to impress someone. Whether it’s something embarrassing but harmless (attempting break-dancing and cleaning the floor with one’s face), self-destructive to the point of suicidal (setting one’s arm on fire to demonstrate pain tolerance, while wasted and nowhere near water), or flat-out gross (grinding up against a strange women in a club, because that’s what one is meant to do in a club and she should know that), the pattern is the same – the guy is functioning on a set of assumptions about what they are meant to do as a man (be awesome, be tough, and be sexually dominant, respectively), has put those assumptions into practice, and has discovered that those assumptions don’t actually work out so well.

Best-case scenario, this will lead to our man reflecting on and revising his definition of manliness. More likely however, pride and confirmation bias kick into overdrive and the dickhead lashes out at other people for ‘making him look stupid’ – admitting that the only one making him look stupid is, in fact, himself, would be too much for his pride to deal with.

Remember these a beliefs we’re talking about here – the foundations that everything else about our personalities are built on. To tell a man that has based his life to date on his definition of manliness that it is wrong, is literally no different from telling a committed Christian that there is no god – not only are they not going to listen to you, your razor-sharp critique is actually likely to strengthen those beliefs.

So what should we do then? Is this going to be one of my patented and totally unsatisfying ‘everything in moderation’ conclusions? It totally is, isn’t it. God, I hate it when I do that!

It turns out that ‘what does it mean to be a man’ is actually a pretty daft question in the first place, at least when it comes to deciding how you live your life. There is no denying that being male involves several biological differences, as well as different norms for how society treats you (most of them pretty sweet if we’re honest), but it also turns out that these general truths are also completely meaningless when it comes to individual men.

If you are born with the appropriate junk (both physically and psychologically), then congrats, you are a man. It doesn’t matter if you’re physically weaker than a 10 year old girl, grow less facial hair than a peach, enjoy being submissive during sex, or describe your ideal Sunday as ‘prancing through flowers with my shirt tied in a knot, before having a good cry in a bubble-bath while listening to Beyonce and sipping chardonnay’ (Not gonna lie, I just physically shuddered while writing that) – got the junk? YOU’RE A DUDE.

Defining ‘manliness’ as a set of behaviours, beliefs or expectations is just flat out stupid when those standards simply do not match most people that are male and have the dicks to prove it. And what happens when you tell a person that is not a thing that they should be that thing? The same thing that happens when you tell a teenage girl with braces and acne that she should look like a flawless Victoria’s Secret model (who’s been photoshopped because even she can’t meet the standard expected) – unhappiness. Unhappiness and a lot of really stupid, self-destructive behaviour in an attempt to ‘fix’ themselves and be a ‘real man’/’sexy woman’.

You know what? Here’s a definition of a ‘Real Man’ (or Real Woman) for you – someone who forges their own path based on what works best, rather than some idiotic standard that no mere mortal can or really should try to achieve.

Feminism isn’t just the argument that both genders should be treated equally – it’s that gender shouldn’t matter at all in the first place. Looking to hire someone for a job? The question shouldn’t be about giving women an equal chance – gender shouldn’t even be a factor in the decision, because it’s a stupid, useless, hopelessly inaccurate way of judging an individual. And the very first step to eliminating gender from our thinking about others is to eliminate it from the way we think about ourselves. Instead of aspiring to ridiculous standards of ‘man’ and ‘woman’, how about we all strive to be the best we can be, regardless of whether that involves masculine or feminine traits?

As with marriage, institutions should only exist to serve the people within them. The second that institution starts to take on a life of its own, and demand that people change to conform to it, is the day that institution needs to be burned to the ground.

8 thoughts on “Feminist September: The Ethics Of… Manly Men”