Boom. Check that out. Pretty gross, am I right? No wonder women spend so much time and effort shaving, waxing, and plucking to make sure those underarms are baby-smooth. Summer is coming up after all, and imagine the mortification of being caught out in a dress or at the beach with that mess going on under your arms!

Imagine if someone got a photo of that! It’d be all over facebook in seconds and you’d never be able to show your face again. Just look what happens to celebrities if they miss even the tiniest bit of underarm or leg fuzz.

“Not only did the singer appear to have ditched her bra, but she seemed to be sporting a new manly, underarm hair look. Urgh!” – The Daily Mirror

So serious is this threat, that women’s magazines and blogs regularly devotes a half-dozen articles to the topic each month, making sure all the ladies out there know the quickest, cheapest and above all, the most effective method for getting rid of the hair down there. Should you opt for the daily shave? Or is the more painful, but longer lasting hot wax treatment better for you? Should you go for the full-on electrolysis treatment, or is your situation desperate enough to warrant laser surgery? Rest assured sisters, we’ll find the right combination just for you so you can avoid becoming a social outcast and romantic lost cause.

There may well be lots of different opinions about what is and isn’t fashionable at any given time, but you can always bet on one thing honey: female body hair is (in the words of the Daily Mirror) a “body-malfunction” that no one can pull off.

Well that was simple. Nice to have an easy topic for a change! But before we wind this up, I have one additional question for you – how do you feel about this other photo that came up when I Googled “underarm hair”? 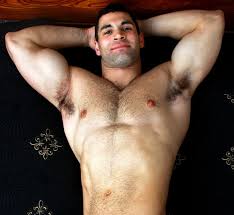 Wow, what a hunk, hey ladies! Between the muscles, the posture and the manly dusting of body hair, we have a pretty damn attractive fella here – or, if your tastes don’t run that way, at least a man who looks exactly like you would expect a ‘real man’ to look.

So why then is it totally cool for a dude to have this amount of armpit hair, but the same amount on a woman is a quick route to dry-heaving and unrestrained disgust?

Why exactly is it that the relatively tiny amount of hair in both pictures inspires such completely different reactions depending on who it is attached to? Why is it ‘sexy’ or at least totally ‘normal’ on a guy, but gross, unsexy or “a body-malfunction” on a girl?

And why is it that women regularly spend oodles of time, money and effort on removing this specific hair, while men don’t (and aren’t expected to) give it a second thought? And often make fun of women for taking so long to get ready in the process?

Women, amiright? Taking so long to meet our expectations! – This douchebag.

‘But it’s all about hygiene!’ I hear you saying. ‘Armpit hair makes you sweat, and that makes you stink and that’s definitely gross!’. And it’s true that there’s nothing very subjective about body odour – that gear stinks.

But even putting aside the question of why this is enough of a concern for women for them to shave themselves, but not for men (who, thanks to all that testosterone, are actually far more likely to suffer from BO), since when is armpit hair the sole cause of bad hygiene? Have women never heard of a shower? Deodorant? Antiperspirant sprays? Oh course they have – they all use them in addition to shaving their armpits.

So if bad hygiene can be managed by different means, and can still occur even after you rip out all that hair, then it’s a fair bet that the hair isn’t the problem in the first place, is it? If it was then surely the risk posed by the tiny amount under your arms would pale in insignificance compared to the massive great forest of it on top of your head, right? Seriously, think about the difference in volume! There’s at least 10 times the amount of hair going on up there, and it’s longer, thicker, deeper. If the hair itself was the cause of the hygiene problem here (rather than, say, lack of maintenance), then why aren’t we all bald right now?

And none of this even begins to address the point that while, yes, armpit hair may indeed increase sweating and therefore increase the risk of body odour, leg hair sure as hell does not. So why are women so dead set on cutting that off then?

Because it looks nicer, right? That’s what this all ultimately boils down to, isn’t it? Shaved legs are considered more aesthetically pleasing on women than hairy ones. And shaved underarms are far more appealing than hairy ones. Fall too far behind these expected standards and you’ll naturally be judged for it – it’s effectively a statement to your peers and potential romantic partners that you’re not interested in their opinion.

And that’s not a small deal either! Humans are social animals; our wealth, health and happiness are massively tied to how accepted we are into our communities, so bucking such an established trend can really cause you troubles.

It’s a real shame then that the established trend in this case is pure, unmitigated, idiotic bullshit.

I’ve made the point before in the epic smack-down of the concept of fashion I wrote a few months ago (hardly a humble statement there, but screw you, it was awesome), that fashion is subjective. Which is to say that what is and is not fashionable is totally, utterly, 100% dependent on peoples’ opinions and absolutely nothing else.

Why are beards currently fashionable for men? Because we decided they were. After years of being the symbol of the Hermits and Basement-Dwellers Association, suddenly in the last few years every Australian man that can is sporting a massive bushranger beard and is considered very fashionable for doing so. And in a couple more years they will be unfashionable once again, fit only for the tragically out of date, and an invitation for mockery by those on the cutting edge of cool. Why? Because we’ll decided they should be.

Note that nothing will have actually changed about the beards in question through all of this – at the end of the day they are, have always been, and always will be just a bunch of hair on someone’s face. It’s purely our own attitude towards that hair that changes, and can easily change right back again. The same is also true for body hair for both genders – I’m sure we are all aware that peoples’ attitude to body hair in the 70’s was quite a bit different from our opinions today for example.

You all know exactly what I’m talking about, don’t pretend otherwise.

Now normally this would all be fine with me – frankly I couldn’t give two damns about other people’s personal aesthetic tastes and how they go about fulfilling those – but fashion doesn’t stop there, does it? Fashion, whether that be the clothes you wear or your attitude to body hair, does not stop at the individual, but rather is a cultural thing. Fashion is not just the statement that ‘I personally prefer this’, but also that ‘everyone else should conform to my preference as well’.

Don’t believe me? Then just go and google “hairy armpits” and see what comes back to you. Of the thousands of results, I guarantee you that at least half will be advice to women on how to get rid of that hair (because it’s gross, obviously), and the rest will be cringe-worthy jokes making fun of any women who dares to buck the trend. And you know what every single one of those items will have in common? None of them explains why that hair is gross. So heavily embedded is this practice, that even to question it is to be considered gross. Even amongst feminist circles the vast majority of women shave their armpits, and refusing to do so is considered a sign of the true hardcore fringe-dwelling radical that’s also probably a lesbian (because why else wouldn’t they shave, right? No man is going to touch a girl with those pits!).

Think about that for a second: what we have here is a cultural practice so heavily and massive ingrained into society that virtually no one ever questions it, and anyone who fails to conduct that practice is automatically and unquestioningly shunned, mocked and condescended to until they get back in line.

And yet after just half a page of critical thinking, the entire practice can be easily proven to be utterly ridiculous.

Imagine if we expected all men to wear red clown noses at all time while in public. Ridiculous, right? Of course it is! But imagine that, despite the utter pointlessness of this expectation (not to mention the inconvenience and discomfort), we were so caught up in this practice that we relentlessly attacked any man who failed to do so.

“Urgh, men’s noses are so gross!” – said no one, ever, because that would be STUPID.

This would be total madness, but yet how is that any different from the zealotry we see every day when it comes to female body hair?

Ironically, one is reminded all too strongly of the demands other nations often make of women, that we in the west take a lot of pride in denouncing. Demanding that women alter their appearance to social or religious standards, despite those standards being idiotic: anyone else think of the burqua just now?

But at the end of the day, who am I to tell you what you should and shouldn’t find appealing? If you genuinely find female body hair unappealing then how can I tell you that it’s dumb to feel that way? Denying reality is a sure path to bad ethics after all. But there is a big difference between having your own personal preferences and expecting, let alone demanding, that others conform to those preferences. Actively mocking, condescending to, or flat-out attacking others for not meeting those preferences? Yeah, we could do with less of that.

So do I expect every woman that walks away from this article to go out there, rip off their sleeves and refuse to ever shave again? Well yeah, that’d be awesome given it’s a stupid practice – but that’s my preference, isn’t it? Instead I would love for everyone reading this, both male and female, to do the thing I always ask you to do: understand why you do things.

Ladies, the next time you pick up the razor or the wax, ask yourself the question: why am I doing this? Is it because I want to? Or because I feel I have to? And if I do indeed want to, should I want to?

Fellas, think about your reaction to that photo I posted at the top of the article and ask yourselves as well: why did I react like that? Would I date a lady with hairy underarms? Why or why not? Would I be upset if my partner stopped shaving her pits tomorrow? Why?

It’s never much fun to confront yourself about these things, but at the end of the day ethics isn’t about doing what is easy. Ethics is about doing what is right – provably right. Are you up for that challenge? Or are the comfortable lies more your thing?

3 thoughts on “The Ethics Of… Hairy Women”